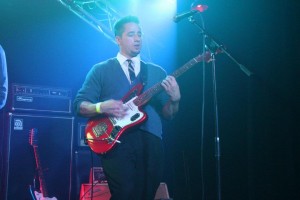 Although no stranger to the surf scene, Mark joined the band in 2004 three years after it was formed.   Mark and Frankie were in a surf band together in the late 90’s playing bass for “The Futuremen”.  Heavily influenced by punk rock, Mark brings his attack style of guitar playing to the band.